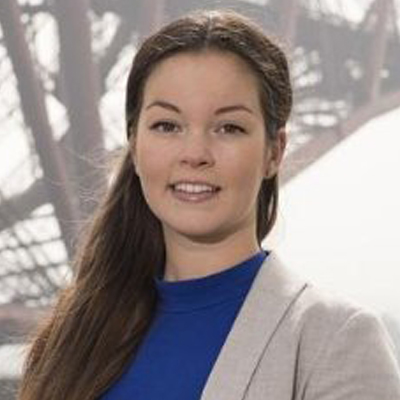 Lorna will be presenting an update on the ground breaking H100 Fife project which is seeking to deliver a ‘first of a kind’ demonstration of a 100% hydrogen network, initially supplying 300 domestic customers in Fife. This NIC project will comprise of an end-to-end system, to include power generation, hydrogen production, storage, pressure reduction, odorisation, distribution and customer connections to serve domestic hydrogen meters and appliances. H100 Fife will construct a new PE hydrogen network to run in parallel to the existing natural gas network. This is a key feature of the project that offers the opportunity for customers to opt-in and be connected to the hydrogen network or remain with their existing natural gas supply. By promoting and maintaining customer choice, critical information on customer attitudes and interest towards hydrogen can be measured, providing evidence on public acceptance of hydrogen.

Lorna joined SGN in 2018 with a background in energy, education and engagement. Before coming to SGN, Lorna had previously worked on hydrogen projects, in renewable energy education and in economic development, specialising in offshore wind.

Lorna is now working on key heat decarbonisation projects within the Energy Futures team at SGN and is one of the project managers for H100 Fife. This project is seeking to deliver a first of kind 100% hydrogen network in a move to decarbonising heat using the gas networks. Using offshore wind for hydrogen electrolysis and demonstrating a viable route for heat decarbonisation, this project is at the forefront of the energy transition.